5 Things to Make with Apples from Apple Picking

It’s officially fall. The leaves are starting to change, and apple picking season is here.

Apple picking is a fun fall activity to get outdoors while you still can, and no matter what your age, it’s fun. It’s also a great activity that allows you to easily socially distance and be safe while doing it.

There are SO many apple farms just outside of Toronto. The big one being Downey’s. Although Downey’s can be a fun option for kids as they have all the attractions you can think of there. It also is exceptionally busy. Currently, they are only accepting those that have pre-bought tickets in advance in order to control and limit numbers during COVID.

Where do you go apple picking in the GTA?

Personally, I like the quieter farms. Not only do I feel like they have a nice charm to them, but you also likely won’t have to wait in a car line-up all the way down the back country road. This year I selected Wheelbarrow Orchards in Milton. This was solely based that it was just near where we were going to be that day, and they advertised as being a “quieter” picking spot, and they definitely were.

What can you make with all the apples you pick?

But once you pick a 10-20lb bag of apples. What on earth are you supposed to do with them all? How many apples can you really eat before they start to rot? Well the good thing about apples is that they are incredibly versatile and you can actually do so much with them. I’ve gotten creative this year to make some different recipes with my apples and now hardly have any left! Here are some of the recipes I created in my kitchen:

I ALWAYS make apple crumble/crisp with freshly picked apples. Not only is it the perfect comforting dessert for fall, but it’s also so easy to make, and WAY easier than making a homemade pie. This year I used this Healthy Apple Crisp recipe by Ambitious Kitchen. However, I did opt for the butter versus coconut oil so it definitely wasn’t really “healthy”. Serve it hot with your favourite vanilla ice cream.

There are several recipes online for making apple pancakes but what I did was made typical pancakes (choose whatever your go-to recipe is) and then made these Paleo Baked Cinnamon Apples in the oven to put on top with maple syrup. They were SOOOOOO good.

When was the last time you ate apple sauce? I definitely can’t remember. We kind of forget about it as adults, but I thought it be a tasty recipe and snack to have on hand for the week. I made this easy crockpot recipe from Belle Of The Kitchen. The recipe uses four simple ingredients (apples, sugar, cinnamon, and water) and will make your house smell heavenly as it cooks.

As much as I love to snack on apples on their own, I also get sick of them pretty quickly, so this is a great alternative and snack to have on hand. This recipe is also great when you have more apples than you know what to do with. Made with just apples, and cinnamon, this recipe is easy, and so good! You’ll just need multiple hours to let these sit in your oven. If you’re lucky enough to have a dehydrator, you can use that instead!

Nothing says fall more than pumpkin and apples, so why not combine the two? This recipe I made is made in an Instant Pot, however, I wouldn’t recommend it. Although the butter turned out okay, it took a lot of trial and error with my Instant Pot, and adding random ingredients to get the taste right. Instead, I’d go for a recipe on your stove like this one, or slow cooker like this one. Use the butter to spread on toast, biscuits, scones, or even putting it on top of vanilla ice cream.

What are your favourite recipes to make with the fruit of your labour every fall? Share below in the comments! 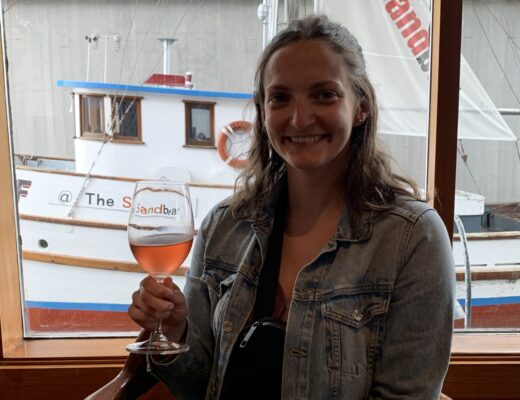